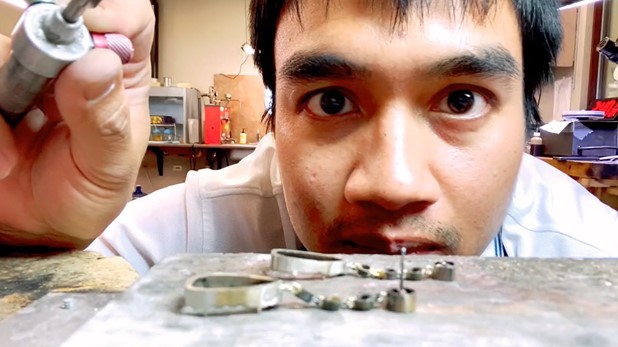 When it comes to crafting and repairing jewelry, you would be hard-pressed to find anyone better than Studio D Jewelers’ own Bee Tanut. And that’s not a humblebrag either. It’s simply a fact. Studio’s bench jeweler/goldsmith is one reason why Studio has become the location for custom jewelry in northern Illinois. Bee can do it all. Carving, casting, fabricating, stone setting, polishing, designing, you name it. He is a true master jeweler.

But while the jewelry he creates is fascinating, how he ended up doing it for Studio D is the real story.

Growing Up With a Different Kind of Toys

Making jewelry is something that Bee has known for as long as he can remember. Born in Thailand, he was the youngest in a family of accomplished goldsmiths. In fact, the first thing that Bee ever remembers is his mother (an engraver) creating a Buddha frame with a temple on the back. The tools used by a jeweler feel natural in his hands because that is what he grew up with. His uncle owned a shop with more than 30 employees and enlisted Bee’s help in making jewelry when he was ten years old. It was there Bee got a head start as a jeweler by learning all the tips and tricks from the pros around him.

“All of the tools feel so familiar to me because they were like my toys growing up,” Bee recalls. “My uncle would tell me to stop playing and give me engraving jobs instead. Once I was good at that, he gave me fabricating jobs. I enjoyed all of it because it allowed me to be an artist. I liked drawing, and engraving is easy for me because you engrave what you draw.”

By the time he started fabricating, Bee was making authentic jewelry and learning additional arts. He attended Rajamangala University of Technology in Thailand (along with his brother and a cousin), where he became proficient in hand-carving. Bee gained such a reputation while at the school that other students would pay him to fabricate their assignments for them – and the professors learned to look out for that! “I had to learn to not do my best work for those pieces,” Bee laughs. “I learned more at my internship in a factory in my senior year, working for six months as a carver and doing side jobs too. I was able to learn to do repair work and to produce custom pieces, to be considered a master jeweler.”

Bee worked in Thailand for three years after graduating before moving to the United States after meeting his now-wife, Lana. He first got a job making jewelry in a different shop. But his work there never allowed him to challenge himself and express his creativity. Until one day, he met Nick, the previous jeweler at Studio D, who knew of a place that might be a perfect fit for him.

At the time, Nick was planning on getting married and moving to Arkansas, so he knew there would be an opening for a jeweler at Studio D. He introduced Bee to (Studio Founder) Tom Dougherty and CADsmith John Christensen, and the rest is history. “The most amazing part of this team is how relaxed the atmosphere is,” Bee says. “Everyone is very supportive of each other, and I am given creative freedom to work as an artist and help bring customer’s visions to life.”

Bee became a U.S. citizen in 2020, and he and Lana recently welcomed their first child, a son. He still has very strong ties to his family in Thailand and celebrates the Thai New Year, a water festival called Songkran. It is celebrated by spraying water on each other, as water is considered purifying and symbolizes good health and fortune for the coming year. Learn more about Songkran here.

A Worker Bee at Studio D

Tracy Gibson, manager of Studio D, observed about Bee, “the focus that he can call up when something needs to be turned around quickly is unmatchable. Not only can Bee do the hand-carving, he understands CAD and works in tandem with John to create and perfect these pieces. We had a client once who wanted to give his wife her first “real” engagement ring for their anniversary. It was a very tight deadline, and we would not be able to get the needed mounting in time. Bee asked if we wanted him to make it – and then he went to the shop and did it by hand in a couple of hours. We have video on this piece and so many more. He is not only an amazing craftsman but also just a fun person to be around.”

You can see many of Bee’s amazing creations in our store and videos of some of the jewelry he makes at Studio D by clicking here. But if you want to see him create a piece just for you, you’ll have to visit Studio D Jewelers on the Woodstock Square!

Thank You For a Great Year From Studio D Jewelers

The Rock of Studio D Jewelers