Our Custom Jewelry Designer Has a Mean Drum Solo 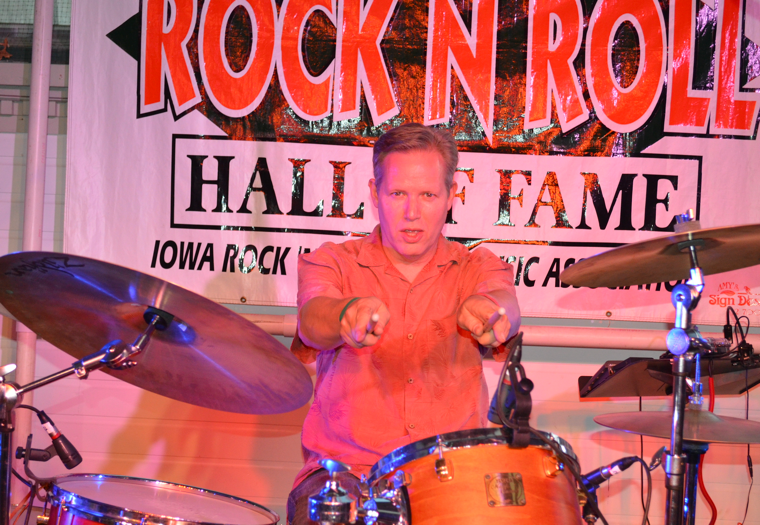 Decades later, he is a graduate gemologist and award-winning CAD jewelry designer whose original designs include stunning set gemstones and other made-to-order pieces, while also restoring antique jewelry.

But that is not even half the story. John Christensen is a multi-talented man whose creative impulses have taken him around the world searching for perfect gemstones and landed him in the Iowa Rock and Roll Hall of Fame as the drummer/singer/songwriter for the band Jonesin’.

It is a résumé full of shiny things and shining accomplishments. From one-of-a-kind rubies and 2.2 carat diamond solitaires to eight years in the spotlight opening for bands that included Santana, U2, and the Marshall Tucker Band.

“I just like creating, whether it’s music or jewelry,” Christensen explains. “There is a lot of satisfaction in sitting back and looking at something that’s going to be an heirloom for three generations.”

Not that Christensen spends much time sitting back. He still records drum tracks from a basement studio. His brother David and sister Julie are also musicians and fellow Iowa Hall of Fame inductees.

An Art Where Passions Collide

For the last five years, Christensen has been practicing a hobby that combines his passion for drumming with his jewelry-making skills: custom drum engraving. He said he did not know such an art existed until seeing it at a drum show in Chicago. Today, he is on his 27th drum, using a technique developed in the 1920s to create elaborate scrollwork and other designs that expose the brass beneath a black nickel plating. “It’s a niche. There are only four or five people who are actively engraving drums by hand at this time. It will definitely be my passion project in retirement someday,” Christensen says.

When he is not playing music, engraving drums, traveling the world, or spending time with his wife Cindy, Christensen loves creating custom jewelry and restoring antique pieces for the customers of Studio D Jewelers.

“I can do literally anything,” he says. “I just need some input. If (customers) send me 10 pictures they saw on Pinterest, I take pieces of all those things and put them into a design. We talk about their different wants and needs, and I create it on the computer.”

Customers provide input on a 3D rendering of the piece. Once they are happy with what they see, Christensen creates a 3D print, and the piece is cast.

The results are as limitless as Christensen’s imagination. From a wedding band in the shape of a dragon tail, to a replica of a snare drum, to an enamel and diamond-dotted map of Denmark on a ring, Christensen’s work often involves rendering a bit of family history or a milestone into a wearable memory. It is a passion and a skill that has earned him numerous industry honors.

But it is the challenge and the novelty that drives him, he says. His expertise is the product of an active imagination and a penchant for learning new things. “Learn until you die is going to be on my tombstone,” he says.

Do you have an idea for a one-of-a-kind piece of jewelry, or have a family heirloom that could use a bit of restyling? Stop by our studio at 118 N. Benton Street, Woodstock, Illinois 60098 to see what our award-winning team of jewelry designers can do for you. You will be surprised by how accessible a personalized piece of jewelry is when compared to retail designers.

Visit our website to learn more about what makes the jewelry from Studio D Jewelers so special.

Thank You For a Great Year From Studio D Jewelers

The Rock of Studio D Jewelers